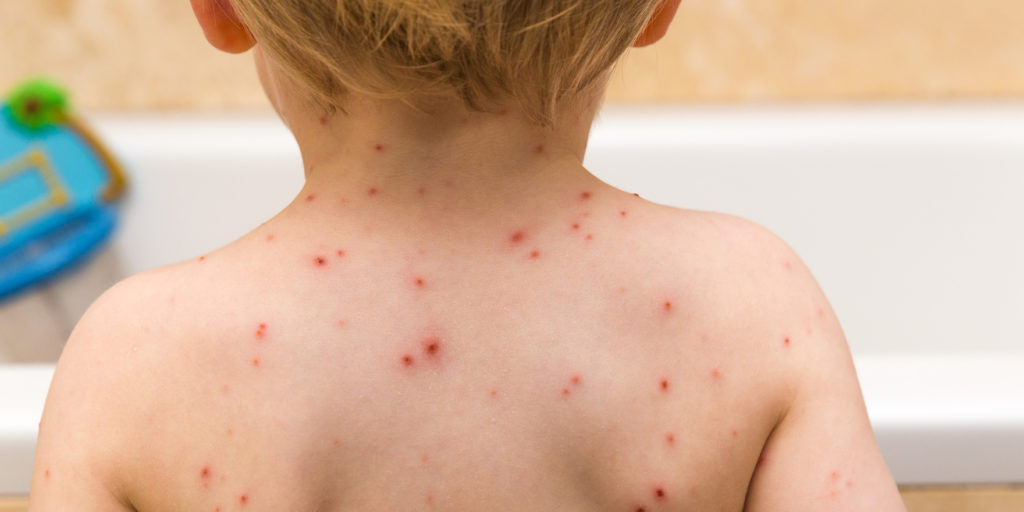 Varicella is usually a mild and common childhood illness that can also occur at any stage of life. The illness must be treated seriously in all cases because it can be associated with severe complications and even death.

Varicella causes a rash of red, itchy spots that turn into fluid-filled blisters. They then crust over to form scabs, which eventually drop off. Your child is likely to have a fever at least for the first few days of the illness and the spots can be incredibly itchy, so expect them to feel pretty irritable and miserable while they have varicella.

Some children have only a few spots, but in others, they can cover the entire body. The spots are most likely to appear on the face, scalp, and ears, on the chest and belly, under the arms and on the legs and arms.

Varicella can be severe at any age and have serious complications. Pregnant women should be especially careful to avoid varicella as it can affect the unborn baby by causing fetal malformations, skin scarring and other serious problems (Congenital Varicella Syndrome).

There is no specific treatment for varicella, but there are pharmacy products and medicines which can help alleviate symptoms, such as Paracetamol to relieve fever and Calamine Lotion or Cooling Gels to ease itching.

Within one to two weeks in most children, the blisters crust up and fall off naturally. Adults who have had varicella as a child may also get shingles later in life, as they are both caused by the virus Varicella Zoster.

The best way to avoid varicella is to have your child immunized. Varicella vaccination is recommended as part of routine childhood immunization to help prevent the disease.

Immunization against varicella is achieved in one dose of the MMRV (measles-mumps-rubella-varicella) combination vaccine at 18 months of age. A catch-up program is available for children aged 10-13 years who have not received the varicella vaccine.

The varicella vaccine should not be given to any child taking high doses of immune-suppressing medicine or to children with severe immune deficiency diseases, including HIV/AIDS.

Avoid people with varicella because it can sometimes be spread through contact with objects that have been infected with the virus, such as children’s toys, clothing or bedding.

If someone in your household has varicella, you can help stop the virus spreading by wiping any surfaces or objects with a sterilizing solution and making sure that any infected bedding or clothing is washed regularly.

If you or someone close has varicella, then remain isolated from others to prevent cross infection. This means taking time from work, attending school or care and social contact. Check with your doctor how long to remain isolated.